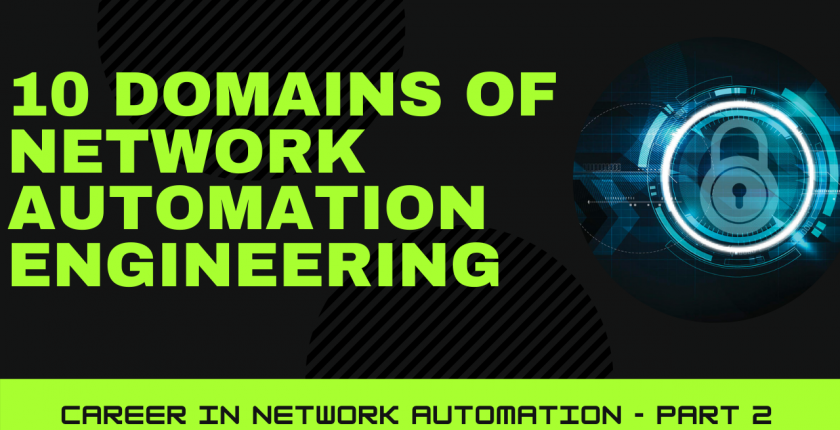 In this article, I discuss ten domains of knowledge essential for a career in network automation engineering, i.e. roles such as Network Automation Engineer, Network DevOps (NetDevONs), and NRE.

An Introduction to the Network engineering career

We discussed the shifting landscape of the network engineering career earlier and why you must take an action now. In this article, I want to dig deeper into the Network Automation Engineer, the NetDevOps, and NRE roles and double click into the related domains of knowledge or the building blocks. Hang in there. Be right back. So, here is the lay of the land.

In my opinion, these are the ten domains of knowledge that you really need to master to become a network automation expert. Since all these roles start with the network as the keyword, let’s double click into each of them starting with the Networking skillset. So, for networking, it starts with the vendor device APIs and SDKs where APIs are for building scripts in mostly Python whereas the SDKs are for building comprehensive software integration or something you can call an App. Now, there are a number of third-party libraries to make integration easier such as NetMiko or Nornir.

As you interact with devices, such as Cisco routers and switches, you will also need to know a modeling language such as YANG. Why, well, because YANG is an IETF standard, so it provides a standard way to model configuration, state, administrative actions, and telemetry data across vendors such as Cisco, Juniper, or Arista. YANG models do not dictate the actual transport protocol and the encoding standard, so those are something an automation engineer can choose, but primarily your choices are NETCONF, RESTCONF as protocols, and XML and JSON as the encoding formats. It may sound confusing because it is, but think of YANG as something that describes the configuration changes where a protocol is something that applies those changes to the relevant datastore on the device.

Networking fundamentals such as concepts of VLANs, MAC and IP addresses, IP services such as DHCP, DNS, SNMP, NAT, the difference between control and data planes, and how applications are dependent on the network to function. In my opinion, networking knowledge applies to all automation roles however only covered in the Cisco DEVASC exam.

NEXT UP, is Coding and that is the foundational skill for any kind of automation. True, there is a Dev in DevOps, but it isn’t the same as the Dev in Developer. Let me explain. Coding means enough programming knowledge to put together smaller programs or you can call them scripts if you like, so that is the Dev in DevOps. Now, Dev in Developer is about the application programming, that is where you are writing full-blown front-end or backend application code. Anyhow, I think you get the idea. So, DevOps work on automation coding or scripting in Python for continuous integration or CI, continuous delivery, or CD like Infrastructure as Code like writing templates, Ansible playbooks, etc. It could also be about writing python or Go programs for the monitoring and logging or telemetry. So, in short, coding as a DevOps isn’t the same as coding as a developer and that is good news for a traditional network engineer with little no background in programming.

In my opinion, coding knowledge applies to all automation roles it is covered in all Cisco DevNet exams.