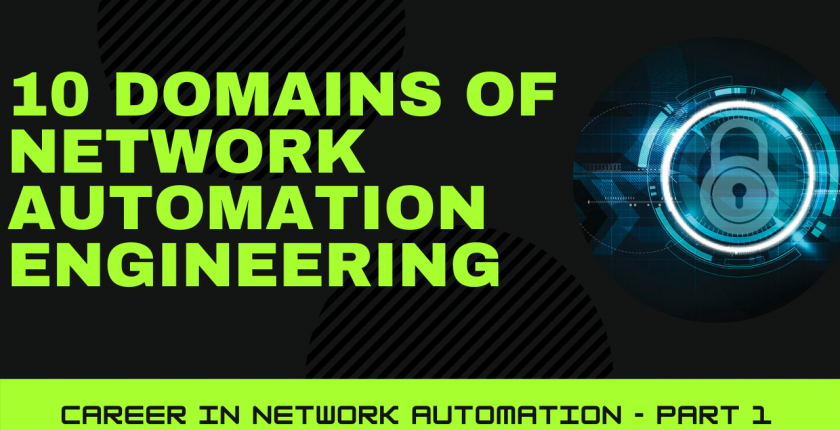 In this article, I discuss ten domains of knowledge essential for a career in network automation engineering, i.e. roles such as Network Automation Engineer, Network DevOps (NetDevOps), and NRE.

Table of Contents hide
1 A deeper look into Network Automation Engineer, the NetDevOps, and NRE roles
2 The role of Linux
3 Security

A deeper look into Network Automation Engineer, the NetDevOps, and NRE roles

We discussed the shifting landscape of the network engineering career earlier and why you must take an action now. In this article, I want to dig deeper into the Network Automation Engineer, the NetDevOps, and NRE roles and double click into the related domains of knowledge or the building blocks. Hang in there. Be right back. So, here is the lay of the land.

In the previous articles, we discussed the ten domains of knowledge that you really need to master to become a network automation expert. OS FUNDAMENTALS is another critical skill you must learn.

The role of Linux

The good news is that pretty much all DevOps tools run on Linux, what am I talking about? The Git, build server, configuration management tools such as Ansible, and the list goes on and on. Linux has multiple distributions, and they are somewhat different when it comes to package managers, the desktop environment, the user-land environment and services, default packages, and so on.

For network automation roles, I would suggest you consider Ubuntu, Debian, and CentOS distributions. As an OPS person, you also need to understand shell scripting like Bash shell, Linux file system, text editors, and manipulation tools such as Vim, grep, awk, head and tail, etc. There are also system performance and process monitoring tools that are worth knowing. Yet another area is Linux networking concepts, commands, and virtualization tools such as KVM hypervisor and Linux containers or LXCs. OS fundamentals are mostly relevant to Network DevOps and NRE roles, and they are only covered in the Cisco DEVASC exam.

SECURITY is yet another knowledge area worth considering if you are looking to be a NetDevOps or NRE. It is about learning application security like how to create secure software, infrastructure security which is about securing infrastructure whether that’s hardware, software, or cloud.

When it comes to the network, security can be implemented in the form of firewalls, IPS, proxies, etc. Understanding commonly used security technologies and protocols such as SSL, or SSL over HTTP, SSH, and things like control plane policing. Understanding the threat landscape is supercritical, at the very least learn everything about the OWASP Top 10 threats which includes threats such as SQL injection, cross-site scripting, insufficient logging, and monitoring. Finally, API security such as an end to end encryption, generation and use of certificates, and oAuth protocol for authorization. Security is applicable to all network automation roles and is referred to in just about all Cisco DevNet Associate and Professional exams.