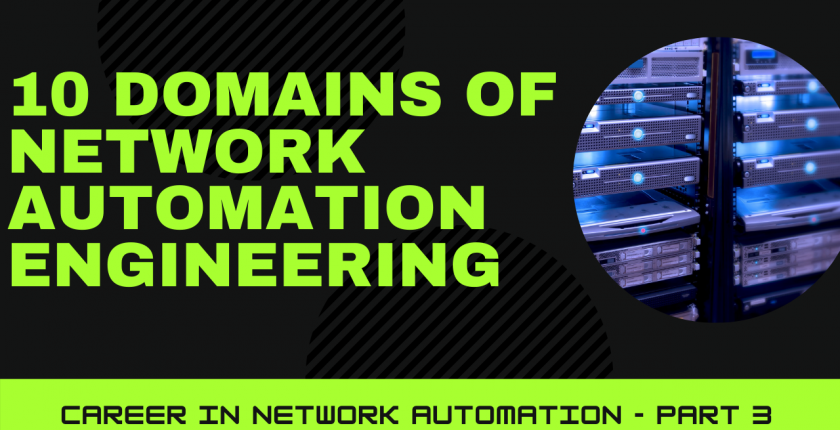 In this article, I discuss ten domains of knowledge essential for a career in network automation engineering, i.e. roles such as Network Automation Engineer, Network DevOps (NetDevOps), and NRE.

Table of Contents hide
1 A deeper look into Network Automation Engineer, the NetDevOps, and NRE roles
2 Different Types of Servers
3 Infrastructure as Code or IaC

A deeper look into Network Automation Engineer, the NetDevOps, and NRE roles

We discussed the shifting landscape of the network engineering career earlier and why you must take an action now. In this article, I want to dig deeper into the Network Automation Engineer, the NetDevOps, and NRE roles and double click into the related domains of knowledge or the building blocks. Hang in there. Be right back. In the previous videos, we discussed the ten domains of knowledge that you need to master to become a network automation expert.

EVERYTHING from Dev to Ops runs on servers, bare metal or virtual or hosted in the cloud. So, what are we talking about? Source Code Management servers such as Git, Build servers such as Jenkins or Drone, and various applications, database, and web servers depending on the customer-facing software requirements. Virtualization technologies such as VMs and containers, so we’re talking about Docker, Docker Swarm, and Kubernetes. Beyond that, you might want to dig into some popular web server software like Nginx and Apache which pretty much power over two-thirds of the web servers in production today. You may want to investigate web proxies, which come in various forms, so you have forward and reverse proxies. Let me explain. A forward proxy is an intermediary situated between the client and any server. The reverse proxy is at the other end, something that is placed in front of the server and any client. In short, if your frame of reference is the web client or a browser, then a reverse proxy is an intermediary on the side of the server you are connecting to. Enough said. Finally, there are caching servers and application load balancers. Load balancers come in various shapes and forms, like a classic load balancer, a network-based load balancer, and an application load balancer. The real difference across them is primarily about the OSI layer they operate at or the HTTP protocol header and payload that they use to make the load balancing decisions. Knowing servers is relevant to all automation roles and it is thus covered in most Cisco DevNet exams.

Infrastructure as Code or IaC

NEXT UP is Infrastructure as Code or IaC. infrastructure as Code (IaC) is the management and automation of infrastructure that is networks, virtual machines, load balancers, and the topology in a descriptive model, using the same versioning as the DevOps team uses for source code. IaC is a key DevOps practice and is used in conjunction with continuous delivery. It is accomplished using configuration management and orchestration tools such as Ansible, Puppet, Terraform, AWS CloudFormation, etc. Since we’re talking about networking infrastructure here, you need to learn Cisco VIRL, Cisco NSO, and the network controllers such as APIC for building network topologies using say Ansible playbooks during the stages of continuous delivery and testing. Now, we’re still left with 4 more knowledge areas, so look out for more videos in this series.